One of the next things we are preparing for is the exterior paint. I want to get this out of the way first for more then one reason. We will more then likely be covering some of the windows. In order to cover them I need to know where everything is going to be on the inside. But I can't start framing the inside until the metal is in place on the outside so we will just have to figure out where everything goes. Then we will put up the metal and then we will paint. Today was just some minimal prep work that had to be done sooner or later so I chose sooner.

First, I went around and removed all the existing mirrors on the bus. Then I removed the arm mechanism that swings out when the bus stops for pick ups and drop offs. It left a few holes in the bumper but nothing I am worried about. 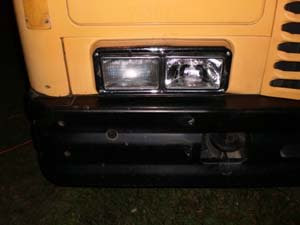 I also removed the stop sign. There are two nice size holes where the stop sign was. I will have to patch those before I paint. 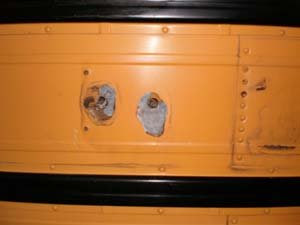 Then I started washing the bus. I used a brush on a pole and the Clorox All Natural Green Works Cleaner. I washed all the way around the bus. Man is that thing big.

It was dirty and definitely looks better now. My main goal was to get all the major dirt and grim off the paint to begin preparing it for paint. 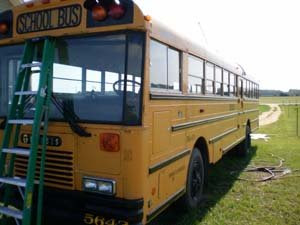 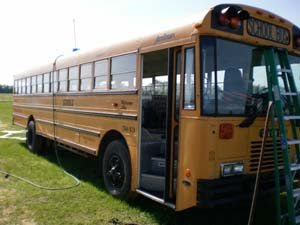 Then I had to tackle the roof and it was the dirtiest.

I am about half way done here. 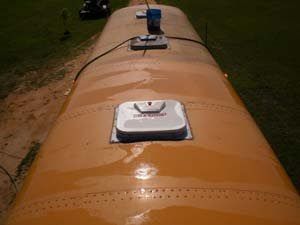 Here is a before and after of the roof. 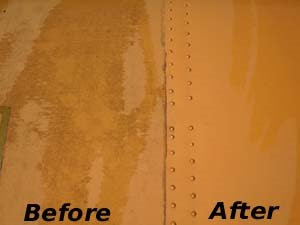 I got a nice sunburn today and a good work out that's for sure.

In the back top of the bus it looks like the previous owner had backed into something and bent the metal in right where the warning lights are. I will be covering these holes so it isn't a big deal but I need the surface to be flat and it isn't. I was able to pull the metal back out a little. I will probably work on this more later. 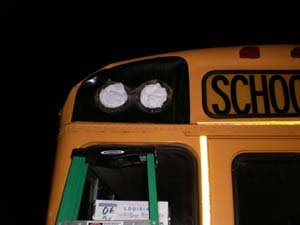 To rap the day up I went in the bus and removed all the "Emergency Exit" stickers that seemed to be on about every other window (Slight exaggeration...only slight.) 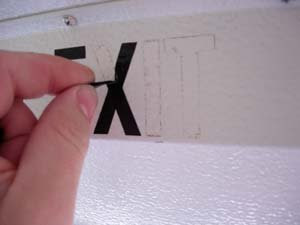