I have some updates to tell you all about.

The last couple months I have been very busy with some other things so I have been unable to work on "Good News". Well the good news is I have some time again so I am getting the bus finished.

I had 4 more cabinet door that needed building so I got them cut out, stained, assembled and varnished. 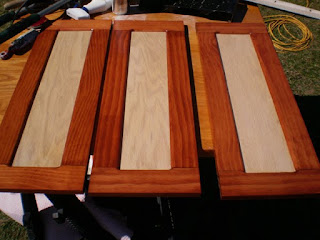 The 4th I installed over the opening where the trash can goes.

It is a slide out trash can so we purchased brackets that enable you to hook the cabinet door directly to the sliding mechanism. 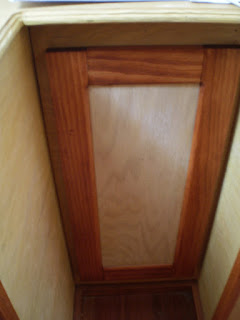 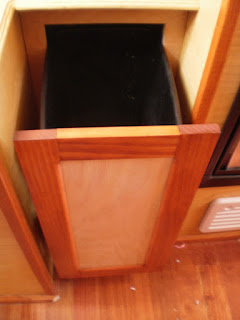 The other 3 cabinet doors were installed in the master bedroom.

One had already been installed from before. 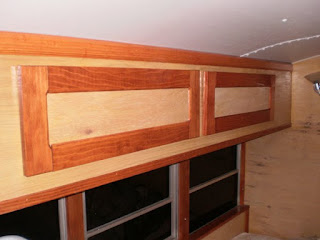 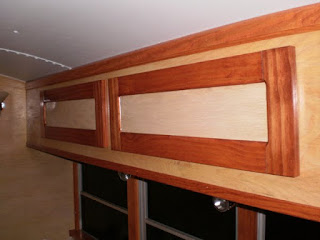 There was trim work to be done in the kitchen on the cabinet that goes along the passenger side. I had thought long and hard how I could bend a piece of trim to mold to the contour of the ceiling but I could not bring myself to invest the time. Instead I cut multiple pieces (3 to be exact) to get the contoured look: 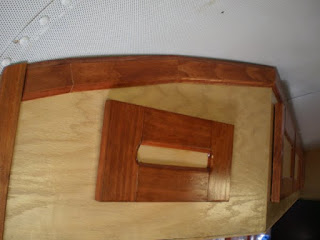 Next I finished trimming out the rest of the cabinet. 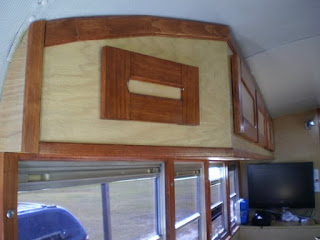 During the last month or so I was bothered with how I did the water storage tanks.

Problem 1: Both tanks are filled through one tank. As one tank fills the tube that connects the main tank to the other tank allows it to fill also. The tube I had used was not allowing enough water to flow through it so it took a while for the Seconal tank to fill up.

Problem Solved: I re-plumbed the tanks with a larger pipe that goes from the main tank to the second tank. Now it fills faster. Tubing was scrapped.

Problem 2: I had no way to drain the tanks other then letting the water run until they were dry.

Problem Solved: I connected into my new pipe that connected both tank together and installed a valve. When it is opened both tanks drain out of the bus! 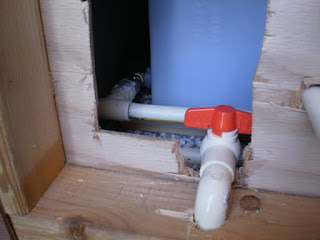 I love the "contoured look"...it is sometimes so difficult being a perfectionest, huh? :) Looks great!

How do you attach PVC pipe connectors to water tanks. Do you tread the tank? You can't get to the inside to attach any kind of nut. Thanks, Randy

There is a threaded, female outlet on the water tank.